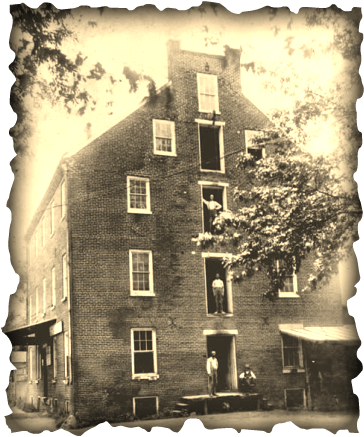 the Old Mill circa 1805
In a province called Upper Freehold, having this name because it is farther inland from the Atlantic Ocean than Freehold, there were no roads, and "Indians" were the residents.

In this place, a man named Nathan Allen purchased a piece of property from Robert Burnett, and in 1706 built a grist mill powered by a waterwheel.  Mr. Allen selected this specific location, because Doctors Creek provided the flow of energy needed to power the waterwheel. The flow of dropping water is what turns the waterwheel ,which in turn does the work for which the mill was intended, in this case grinding wheat into flour.

1706 was about 25 years before George Washington was born,  just to give some perspective to the time frame.  Grist mills were an important step in the advancing of civilization in the new world. They created an anchor around which newcomers could gain a foothold.

As people came to the new world, pouring off the sailing ships that brought them from Europe there were no roads or trains to help them to get to where they thought they wanted to go. These newcomers walked or rode horses and would likely stop at the first place that looked even remotely suitable. For some, that was close to the spot that Nathan Allen built his mill.

The Mill stayed in operation through a succession of owners until circa 1850, when the building either burnt down or was torn down, depending on which historical account one accepts.

Using the most modern design of the time for "automated gristmills", a fellow by the name of Abel Cafferty built the brand new state-of -the-art structure that still stands to this day... what is known as The Old Mill.

Oliver Evans (1755-1819) , a young millwright (a person who designs and builds mills) from England, perfected the milling process and submitted his ideas to the newly created patent office of the United States.  Evans received the second patent issued by the US government entitled "automated gristmills". It was this patent that Abel Cafferty used to build his cutting edge gristmill.

The gristmill opens for business circa 1855, ran strong until about 1950, when the owner sold the building to someone who no longer wanted to grind flour for human consumption and began mixing feed for animals.

In America, society changes more rapidly than any place in the world and any given business must keep up or go broke. And so it is for Allentown, NJ.   Competition from large industrial feed mills in the Midwest put a stop to the small waterwheel driven mills in the northeast and they, one by one, fell back into the ground from which they came.

Not so for Allentown though.  Soon a smart, handsome, alot of hair, funny, intelligent, spiritually advanced, young man ahead of his time bought the Old Mill, which had been detieroating for years and blew new life into it's lungs.  The Allentown Feed Co was born. 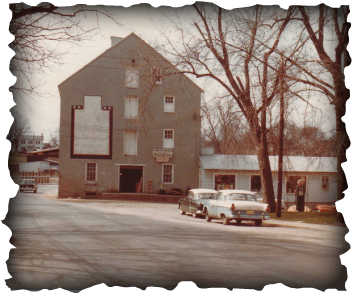 In 1975, Corky Danch purchased a vacant building (pictured to the left). After living in northern California for a few years, Danch had a vision of local craftspeople coming together, forming a community, and teaching their skills.

The Danch Family has owned The Old Mill longer than any other previous owner.

In line with his vision and experience, 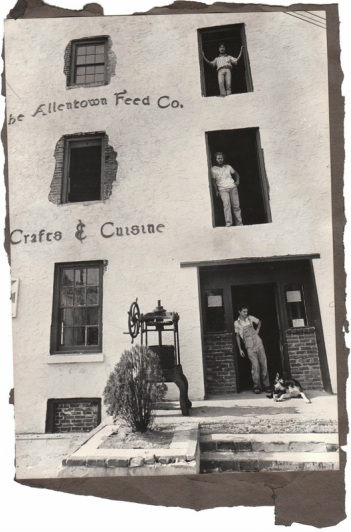 In  the midst of present society, Allentown is in the throws of change once yet again.   The Old Mill has taken a great hit from Hurricane Irene, as did much of Allentown.  The community pulled together and is working it's way back.   The rest is yet to be told.  Keep in touch with our site or even better yet stop by for a visit. We would love to have you.